In last month's prayer letter, we shared with you about our Faculty at Cru meeting. And we started to tell you about the Faculty Appreciation Dinner that followed. Well, as Paul Harvey would say, "Here's the rest of the story." 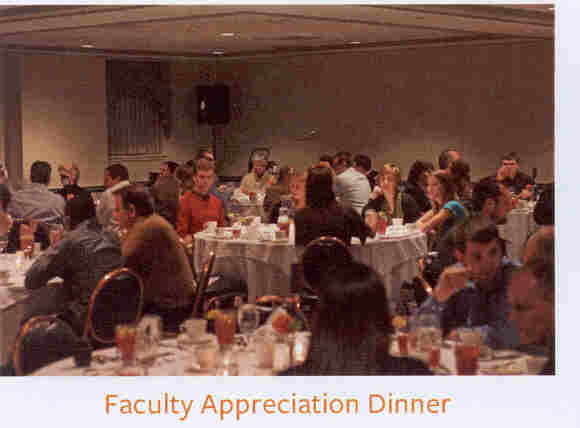 25th. It too was beyond what we ever asked or imagined. 37 students invited 37 professors (most of whom would not identify as a Christian). The dinner was at the Nittany Lion Inn, one our premier hotels in town - THE university hotel. It was a gorgeous event - a beautiful four-course seated dinner. It was probably one of the nicest dinners we've ever been to.

Prior to that evening, students walked into their professor's office to invite them to come. They handed them a nicely printed invitation and said, "Cru, a Christian group I'm involved with on campus, is having a dinner to thank and bless professors, and I wanted to know if you would come as my guest to a dinner in your honor." Many of them - most of them - said "Yes, I'll come!"

The dinner began with a welcome by our student emcee. (All of this, by the way, was run completely by undergrad students. We promised professors that this was going to be a night for Cru students to thank their professors and that's what happened.) He welcomed folks. He blessed the meal and then asked a student at each table to begin the process of introducing themselves and their professor that they brought and why they were so thankful for them. That continued around each table throughout the room.

For the next forty-five minutes or so, it was just dinner - students and professors at a table together eating dinner and talking. Actually this was the scariest part of the whole evening for us. We could control a lot of other things, but we could not make students and professors talk. We had no idea what was going to happen. We had a backup plan with table leaders who had some questions that they could use in case that "awkward moment" happened. But it didn't.

At our table one of the professors there asked Ashley, "Now, how did you as a chemistry Ph.D. student go into full-time ministry?" Ashley got to share his story with him! Afterwards, the professor shared, "Well you know when I was thinking about where I was going to go to college, I took one of those tests about what I would be good at. And one of the things that came up was that I could be a university minister." This is a man who we don't think is a believer. He certainly hasn't identified as such, and we asked him if that was surprising. And he said, "Oh yeah." He went on to tell about his time growing up Catholic. It was something his grad student right beside him had never heard. It gives this student a great opportunity to follow up on later. Then just a few minutes later at our table, another student's professor was asked what her spiritual journey was like during college. She was so happy to talk about it. Again, we don't think she is a believer. However, she was very grateful to be asked about that part of her life, and so she jumped in and shared a lot with us. 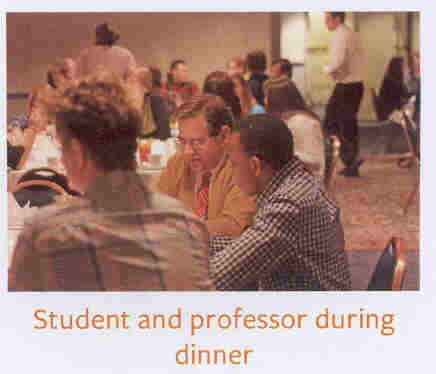 As we look up to find out what was happening, we wonder, "Is that awkward silence happening?" And it's not. There is conversation flowing all throughout the room. It was so awesome and cool to see! At one table - and we are not kidding - we saw two professors high five across the table. We have no idea what was going on, but it was pretty fun to see. And you could tell that they felt relaxed and honored. They were really having a good time.

Afterwards, dessert was served. Then we had two senior students give about a three to five minute reflection each on why they were thankful. They hit it out of the park!

We asked them to do basically three things. First, say "thank you" and tell professors why they were thankful. Second, connect it to their own time and life at Penn State. And third, if they could, connect it to their faith story. We wanted them to not say too much and not say too little. Professors knew they were coming to a Christian event, but we also said "Hey we've come to thank you." We wanted them walking out of the room saying that's exactly what Cru did. And our students hugged that line awesomely. Even the professors there were just amazed at how well both of our students did. It was so cool to see the gospel presented in such a way that professors could understand it. It wasn't too much, or too little. And it really was meaningful to them.

Tim and Ashley sat down, and then our emcee came back up said, "Hey our evening is finished. Thank you for coming. It's been our pleasure to have you here. You're free to go." Professors were invited and encouraged to stay and talk longer if they wanted to, but they were given the green 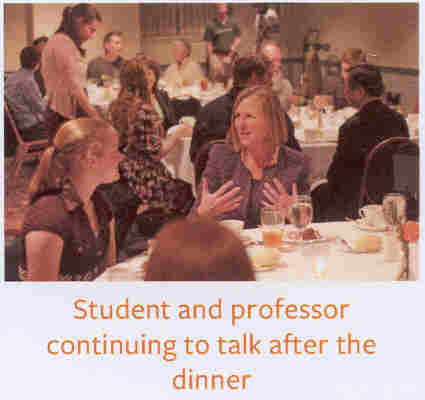 light to leave if they wanted to. Guess what?!  No one left. For the next twenty minutes, most professors stayed in the room talking with students, just continuing their conversations (which included spiritual topics). In fact, one of the professors that some of our staff least expected to ever be at a Cru event or at a dinner like this, was the last person to leave the room. We are literally putting up the audio equipment conveying, "Ah, it's time to go," and he's still sitting there talking with his student. It was so cool to see.

After the dinner, one professor shared, "If I just had one student that would come by my office each year to say thank you that would be enough." And then he said, “However, I never get that student.” He went on to say how meaningful it was to him that we gave him an entire night to say thank you to him.

Another professor said that she did the quick math and then said "You guys dropped a lot of change on those gift certificates and the dinner itself was so nice that it would have been enough. I am overwhelmed at how generous you were to us the whole evening."

It was a tremendous evening, and we are continuing to reap the benefits. Just a few weeks ago on campus, Ashley ran into the professor at his table that asked him about going into ministry. The professor couldn't stop to talk as he had to take an emergency trip to another state to take care of a significant friend in his life that had suddenly become gravely ill. Ashley shared that he would be praying, and they have continued to stay in touch. We are praying that the Lord will create more opportunities for Ashley and this professor to meet, to talk, and to hopefully have further gospel conversations. Don't miss this: if the dinner had never happened, Ashley would have had no idea who this man was, no idea what he was going through, and no opportunity to talk to him about Christ.

You see, God has us do way more than run cool events. He leads us into the lives of real people with real needs who desperately need a real Savior.

And you run into their lives with us as you pray and partner with us financially. We are so grateful for you and for your ongoing partnership in the gospel with us!

Get the blog RSS feed